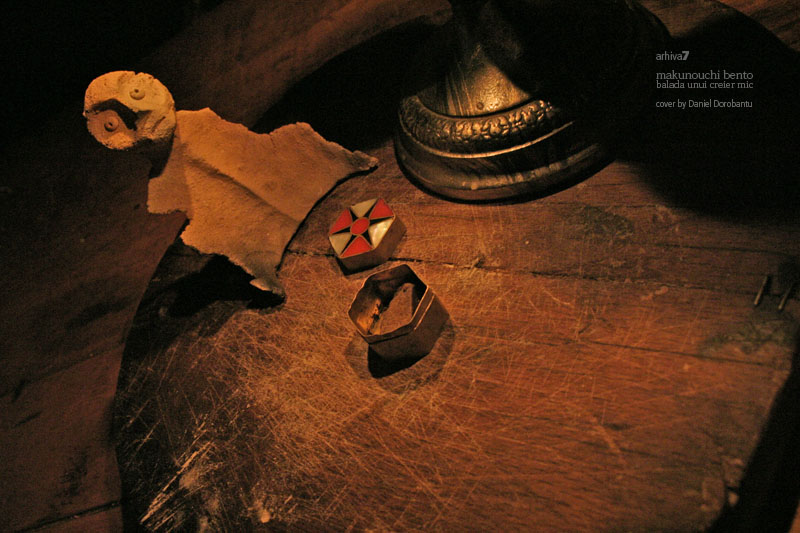 it would be kinda silly to start and count all the actions and releases that implies this great romanian duo, Makunouchi Bento (waka x and qewza), 'cause of the simple reason: they are what we called "bunei".
this 4 tracks release called "Balada unui creier mic" reach out to the ambient sides with some darkscapes sounds; a magical voyage into the brain of a tiny odd creature.
and so we can skip other metaphorical descriptions and go straight to the download area

Reviewer: captaineurope - favoritefavoritefavoritefavorite - June 18, 2005
Subject: imho: Better than the new Autrechre album
Makunouchi Bento present us an interesting EP full of strange, layered and atmospheric sounds. To make a movie parallel, the tracks would certainly be suitable for any Lynch or Cronenberg film or a movie like Cube. I think the first two tracks are the most "catchy", for as far as possible with experimental music. (I recently listened to the new Autechre album but found it very un-catchy and boring) So don't worry that this is that crappy "glitch" stuff: it's not.

"Circes" has a flanged, granular sound that also has something machine-like though at the same time something drunken to it.
Track 2, "Licure" is, to me, a bit more sentimental, also quite melodic.
Track 3. Well my Romanian isn't that good, but if this means USA farmacy 8, then somebody here has definitely taken some wrong medication because it sounds quite drugged up.
Track 4. Spanipig, set a famliar atmosphere and then let's some strange sounds creep in. I'm not sure what to think of it, but for all i know, it's flamenco girls tapping their shoes, a nice barbecue sound (the spanish pig roasting) and something strange happening in the background.

Then finally the artwork: What is this? A Romanian voodoo-doll? ;-)
So, conclusion? Have a listen, it's quite accessible for experimental stuff.